A Walk Along the Rhine 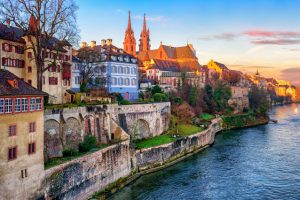 There are two challenges associated with international business travel: trying to stay awake and trying to go to sleep. During a battle with the former I found myself walking the streets of Basel, Switzerland.

The Rhine River splits the city. One side holds a metropolis complete with upscale bars, trendy restaurants, and a slew of social clubs – if by social one means blackened windows, tired red lights, and a sprinkle of enthusiastic hostesses lining the storefronts looking for prey. The other is a historic district filled with cobblestone paths leading to tree-lined churches and grass-covered schoolyards.

I choose the latter in part because it was quiet, but also because I felt as if I was moving toward something instead of simply ambling about. I walked for nearly two hours, passed churches and museums, down park-lined paths, and along the river’s edge. The weather cooperated – warm enough to comfort, but cool enough to lift my spirit and my gaze. Stars, free of competitive skyscrapers, arrested my attention then turned it lose.

I stopped for a while in a deserted park. The absence of people and linguistic wherewithal afforded me the luxury of introspection. Thought shifted to my grandfather and what he might have discovered during his treks through foreign lands. The circumstances were different for sure and that saddened me. Backpacking and patrolling are two distinct experiences and I wondered if he ever longed for more peaceful travels. The way he told it, they were. Though I’m sure there was far more to his war than stealing chickens and playing tricks on his fellow GIs. I always admired how he selflessly shielded us from what I imagine was an ugly truth.

My brother and I have this recurring wish to have a beer with our father and his. We’d ask “Kid Polo,” our great uncle and WWI veteran to join of course. It’s a wish after all – you might as well go big. And nothing could be more soul stirring than seeing a trio of lost men through the eyes of adulthood.

It’s not to be of course. And yet as I walked back to my hotel I felt the presence of a certain soldier – not as the grandfather I knew, but as the boy he was. He seemed strong, playful, and so full of kindness and life that nearly asked him to drop the rifle and join my much easier, much more self-indulgent life path. I pictured him laughing at the request. “Honor,” he’d say and then shrug away the chuckle.

I wanted more time. I suppose you always do once it’s gone, but we soon reached the Mercure Hotel and my bed and his war were calling. I tried to watch him leave, but space and time are hard to see through, even when you squint. And so I simply hoped: that his path be easy, that his load be light, and that someday he’d know for certain how much we loved him for walking that road.

Before turning in I stopped at the deserted hotel bar and ordered a local brew. Alas, with jetlag closing in, I left the beer and the thought unfinished. I headed to bed feeling both disappointed and a lucky bastard. I’m not sure why.