America is Tough to Shop for…. 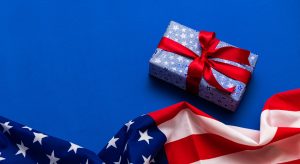 It’s hard to birthday shop for America. What do you get the country that has everything? Purple skies, mountain majesties, amber waves of grain? Nope, all taken. It even has two shining seas. Come on!

Then it hit me. I could invent a free market system to end all isms – race, age, sex…you get the idea.

Some tried to ignore the feelings. Others protested. Most of us went through the motions of a force-fed PC culture that did little to change our underlining thoughts. So how about we give America the gift of honesty?

I call it The Human Trait Exchange. Under this plan each human would be provided a Human Trait (HT) card. The card would list the individual’s preordained attributes including race, ethnicity, age, gender, sexual orientation, gender identification, and abled-ness awarding 11 character credits for each item. Religion and initial economic status would also be listed. However, since they are chosen by the individual and/or naturally adjustable, they are provided only 8 credits each. We’d also include 7 credits for stereotypical skills e.g. water polo for whites, basketball for blacks since, let’s face it, people aren’t going to let that nonsense go. This would bring the person’s trait tally to 100 credits all of which would be of equal value – at least initially.

Once awarded, these credits could be listed on a market-driven exchange, which would allow people to buy, sell, loan, and trade their personal traits based on their perceived value. Thus, going forward, the transparent laws of supply and demand would govern our interactions. To understand the basics of the proposed market, we’ll examine three specific cases.

A young, poor, white male entrepreneur wants to start a business, but lacks the preferred vendor status afforded to women and select minorities. Under the new system he would simply call his broker and offer to the market say 5 male credits and 5 race credits. At the same time, he’d place a buy order for some female and some Native American in order to gain government support for his fledgling enterprise. When the transactions conclude he would instantly adopt these traits, gaining their perceived benefits i.e. not only identifying as a Native American female, but becoming one…at least 10 credits worth. Of course the action would put his “old boys club” membership in jeopardy, but that’s a small price to pay for financial solvency.

A pathetically uncoordinated, 14-year old, Chinese-American nerd is infatuated with an 18-year-old African-American, cheerleader. Unfortunately, she won’t give him the time of day. To remedy the situation, he uses the Human Trait Exchange to sell 2 youth credits and 2 credits of allegedly advanced math skills. He then buys 2 credits of age to become a senior and 2 credits of black to (gulp) make the B-ball team and impress the hell out of Watesha.

An elderly black woman decides to become a young white man. She has been a closet hockey fan all her life and would desperately like to live out her lasting years as part of the New York Rangers. To do this, she sells most of her ethnicity and wisdom to a young, Jewish corporate executive and picks up some youth and Canadian at a surprising discount.

While these cases may appear simple to the novice trader, risks and opportunities are many and varied. For example, a wealthy, conservative politician could woo a coveted voting demographic by purchasing options to be gay. A life-long Christian, who is experiencing a crisis of faith or health scare could cover all bases by selling his charitable nature to a person with lesser altruistic inclinations and thereafter purchase some Judaism, some Muslim, and a splash of Buddhism, just to be sure. Who says you can only serve one master?

Unfortunately, the market has its limitations. Firstly, an agreement would have to be reached with the God-like substance whereby all people would die at the same age. This would prevent the hoarding of youth credits. Also, it’s important to understand that purchased traits would last only as long as the original owner. Therefore, if as a young man, you purchased 8 credits of elderly female, you must be prepared for the loss of those traits when the original holder’s life-course runs out. Once the credits have expired you will be transformed back into your original state for the remainder of your life-course.

Please note: Given the expected level of government inefficiency, a person whose purchased credits expired may experience a brief period of partial nonexistence until the paperwork goes through. To avoid this, the buyer should ascertain the seller’s death day and notify HT headquarters at least two months in advance. Unless of course you enjoy partial nonexistence, in which case, procrastinate your brains out.

In addition to the law against living forever, the HT Market Observers (a highly unimportant branch of the HT High Council) seriously frowns upon any attempt to hoard a certain characteristic. Such monopolistic ventures are considered “seriously uncool” by the HT High Council and are punishable by a vicious batch of name-calling, a rather painful Indian… ah Native American burn, and being sent to one’s room without supper. To limit these attempts, the High Council has stated, said and otherwise exclaimed that no one, no matter how obscenely wealthy he or she may be, can own or have access to more than 200 credits.

Please note, even persons of extreme “hipness” can only incorporate 100 credits into their physical make up at any given time. Any additional credits purchased by the wealthy ones noted above are to be stored in government approved Credits Containers. This rule is to prevent a potential increase of partially nonexistent people, who generally win at such games as “Red Light, Green Light, One Two Three” and “Hide N Seek”.

Admittedly, The Human Trait Exchange is not the perfect gift. It requires a universal death day, the bending of several natural laws, and some assembly is required. Still, people love optimistic, yet hopelessly impossible, simple sounding solutions to complex issues. So, perhaps I should work up some talking points.

Of course, there is another gift option. Respect.

Imagine people seeing beyond labels, treating each other as individuals, and calling out both fear mongering and empty protests for what they are: agenda-based nonsense. Now that would be an awesome gift, though sadly, one harder to procure than my Trait Exchange.

Happy Birthday, America. I wish you good health and renewed joy. And I hope that soon stadiums of people are able to gather, remember, and lift their voices to proclaim that indeed:

America! America!
God shed His grace on thee
And crown thy good with brotherhood
From sea to shining sea!