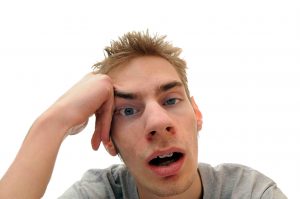 “Okay class, today we are going to learn about plurals. Let’s say you have a dog, a cat, or even a penguin – that’s singular. When you make them plural you have dogs, cats, and penguins. Got it?”

“Ah, okay. If it ends in an ‘e’ you change the middle letters to ‘e’ instead of an adding an ‘s.’ Strange, but all right. So a bunch of moose would be meese, right?”

“No, um you see a moose, just stays moose even when they are plural.”

“Ah…. okay so then a mouse would change to meese?”

“That’s ridiculous. What kind of crazy language is this?”

“So a sheep becomes sheeps?”

“So what happens to it then?”

“Sheep IS the plural. If you want only one it becomes shep…. just one ‘e’.”

“No not really. But give it time. Merriam-Webster isn’t exactly prudish. Words sneak between her pages faster high school hands slide under sweaters on prom night.”

“This is giving me a headache.”

“There, their, they’re. Everything will be fine.”