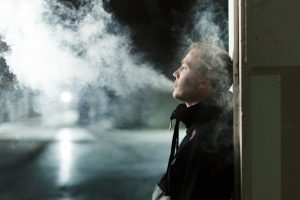 For a person whose bones troubled him so, he had an odd affinity for the rain. He equated the building of a storm to the awkward uncertainty of foreplay with a new partner. In either case he felt tense, twisted, almost oafish in movement, as if he were shouting commands at his body from across a meadow. The feeling grew as the ominous sky turned hostile, crashing, rolling, barreling across the horizon. The tension teased him to immobility and then released, freeing his mind, his soul, his body most of all. Ah, to be limber.

He stopped smoking after Jenny left him. They used to smoke together, but somehow in her absence, the post-sex habit didn’t seem to suit him anymore. He tried of course, other girls, other brands, but it wasn’t the same. These days he only smoked after the rain settled itself into a mix of casually attentive after-play with the sky. Maybe the rain was better than she was. It was certainly more pure.