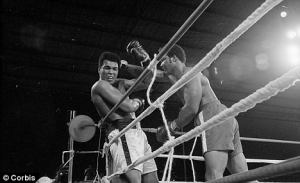 There are a host of strategies to aid those who occasionally experience career induced jitters. Classic techniques such as deep breathing, meditation, and adopting a quiet state of personal gratitude can work wonders…assuming you have the presence of mind to engage them early on.

The trouble with these traditional approaches is that they’re hard to leverage if you’ve already shifted from mild anxiety to a full-blown panic attack. For many, once you start spinning in a doom-inspired thought loop, it’s too late for minor course corrections. Try them and chances are, you’ll just start worrying that your mindfulness game is off the mark, you’re breathing incorrectly, and that you really should give to and do more for charity. How’s that for an irony-inspired jab-punch-hook combo to your already battered brain?

When thought demons bully you to the corner, channel your inner Ali and employ humor as the ultimate rope-a-dope with these three steps:

The Acknowledge, Study and Counter “Rope-a-Dope” approach to fear management can help you put your feelings in perspective and return to the project at hand with an abundance of creativity and energy. This shift in mindset will enable you to slow down, breath harmoniously, think with clarity, and most importantly, laugh in the face of the bully you bested…the one who was never really there.