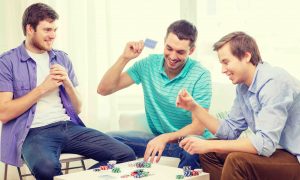 The other day a bunch of the guys were at Pete’s place playing poker. It was Thursday. The same Thursday we’ve been having since we started high school last year. Well, that is until Johnny decided to shift the conversation from basketball to babes. Yes, it seemed that subject had been coming up an awful lot recently, and so while Tommy shuffled the cards more than they actually needed, we all took turns describing the perfect woman.

He had a way of telling stories. You know, kinda like the way Orson Wells had a way. Real special. The way and the stories. So when he got quiet, we got quiet and watched him as he closed his eyes and leaned back in his chair. The silence stood for a moment. Then he dropped the bomb.

“She likes to hold hands and walk in the park. She prefers moonlight to sunshine, but she’s brighter than either one. She loves to cuddle and when she whispers in your ear, the whole world just disappears. She has a little brown puppy named Brewster who, for some reason, I can never imagine growing older.

“Her tears are honest and often, but with eyes like hers, she rarely cries alone. When she’s mad, you’ll know it; either by the wrinkles above her nose or her shoe in the air. But when she laughs, well, then there’s nothing wrong with the world.

“She likes to put her feet up on the coffee table and was never too fond of men who like yogurt. And although she doesn’t care for Billy Joel, she puts up with my obsession.

“She’s seen these eyes, so she knows my soul. And she understands when I curl into a ball and lock my doors. Oh yeah, she loves me and I love her.”

Our eyes were closed and we were silent. Thinking. Planning. Dreaming a wiser dream. That son-of-a-bitch, he made us all grow up a little.