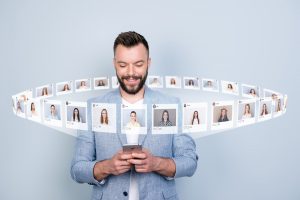 Never ask your married friends for dating advice. We know nothing. Just because we managed to convince another human to say “I do” does not mean we have any romantic superpowers. We don’t. Seriously…not a one.

This is especially true for guys. Despite our euphemistic memories, chances are we never had game. But even if we were the proverbial Barney in our “How I Met Your Mother” crew, by now our references are old, our techniques are stale, and our prowess for navigating the ever-changing social media minefield that accompanies this rite of passage likely falls somewhere between novice and nonexistent.

My buddy discovered this after he gave me authoring rights to his on-line dating profile. I surveyed the cheesiness of his competition and submitted the following (unbeknownst to him):

About Me: Friends insist that I’m too demanding, but finding the ideal woman isn’t like picking up a loaf of bread. For me, there really are some things that are true non-negotiables.

Take a love for animals. I need a girl with at least 15 cats…. ideally two of which are named after psychotic ex-boyfriends who drop by occasionally around 3am. You know, just to say hi.

Keen intellect and a sense of adventure are also good qualities so meeting someone who has mafia connections, access to automatic weapons, and knows the ins and outs of extradition law are big pluses in my book.

Speaking of work, money management is a vital life skill. If someone can’t balance the demands of her bookie, crack dealer, and Amway distributor well enough to maintain a credit score in the high teens, well, I hate to be materialistic, but she’s probably not my soul mate.

And then there’s religion. Sure, some would be okay with an honorable existence and an occasional mass, but they’re slackers. I want a girl who knows Jesus well enough to score an autographed Noah jersey.

Of course, we’re nothing without our mental well being, but in this fast-paced world it’s hard to achieve bliss on your own. That’s why I want a heavily medicated woman who, at the instruction of her court-appointed psychiatrist, is engaged in a variety of group counseling and intervention programs.

Finally, while I’m no George Clooney, I’d be lying if I said I wasn’t into beautiful women. There just has to be that initial attraction. That’s why I really appreciate profiles littered with blurry glamour shots, pictures of your pet, obscure nature scenes, and of course, those family photos from the Carter administration.

To my credit he received a tremendous uptick in interest. Unfortunately, I can’t speak to the content of the inquires or the status of his romantic endeavors as he’s currently not returning my calls. Probably just too busy frolicking with that special someone.