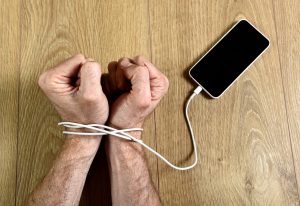 It’s 7am on Tuesday and I’m halfway through my commute. The Hutch is buzzing already, but at least my pack is outpacing the souls heading south. I feel sorry for the stream of city-bound workers inching about roadway. Then I don’t. The West bound ramp to I-287 is approaching and so I down shift my Miata, gingerly negotiating the ominous off-ramp that seems purposely positioned to send commuters on a collision course.

It’s a dangerous thing piloting a vehicle so small, especially admits a kaleidoscope of inattentive operators. Years ago, I worried about road rage and dozing drivers. But now, thanks to the wonders of communication technology, my fears are founded in the scores of workaholics who converse endlessly on their hands-free cell phones. They’re at it already, appearing as a perplexed parade of 1950s switchboard operators.

I used to be one of them, at the office before 6:30, with a good half-hour of drive-time voicemail behind me. I was determined, productive, and, like the majority of my Gen-X brethren, very well connected. I came complete with a home office featuring dual cell phones, two computers, an organizer, scanner, printer and according to my ever-informative electronics supplier, a state-of-the-art modem guaranteed to keep me linked to my personal web-site and quartet of email accounts. And I could be reached all right—anywhere, anytime. My mail came in every form, at every hour, and from everyone, whether I knew them or not. And I was all too eager to respond.

It didn’t happen all at once, of course. An inherently introverted fellow, I actually resisted the electronic age until my career pushed the issue. They say success has its price and so I plodded along, diligently adding to my arsenal of communication components until my twenties expired. Slowly my days grew longer, my weekends shrank, and I began to see vacations as the fastest way to capsize my career.

Still, I somehow seemed happy, as did the majority of Yuppie want-to-bes with whom I kept company. Single, busy, percolating with the commotion of a To Do List-driven existence. We filled our lives with chatter, but for all the noise it suddenly occurred to me how little we said. And so, I decided to stop talking for a while. Not all together, mind you. No junkie can quit straight away. But I made a pointed effort to close my mouth and open my ears.

I started with the home office, setting a rule that I could only answer twenty communications per day. Mail was easy, voicemail tougher, and email near impossible, or so it seemed. I thought I’d be disowned, bankrupted, but surprisingly little changed. It seemed that most often people were talking at me instead of with me, and to be fair, I was doing the same. So within a month, I decreased it to fifteen messages, finally settling on ten as a fair number.

I’ve applied the formula to my family and friends with exciting results. I’m in the process of working through the system in my day job. I’m using bigger numbers of course, but the ratios are the same. In all cases, I find that I’m learning to separate the urgent from the important, saving time and sanity as I go. I’m able to really listen to what the client, friend, or family member needs and when I do respond, it touches the heart of the matter. By talking less, I’m saying more. And I’m doing it with far less equipment. I still get in early, but I leave the office at five twice a week. Small steps make the journey.

Last week I was in the grocery store, eves-dropping on a young man’s cell phone conversation. He was explaining how he was in aisle five, searching for breadcrumbs. Riveting, I know, but here’s the thing. He was talking to his wife, who just found a deal on trash bags in aisle two. Somehow, I don’t think I’m missing all that much.